Where did your family come from? - Immigration Records

Immigration records are an important part of your genealogical search. Millions of people have made journeys around the world to start a new life .

If you now live in the United States of America, Australia or New Zealand  there is a good your ancestors emigrated from Western Europe at some point in the last 400 years. 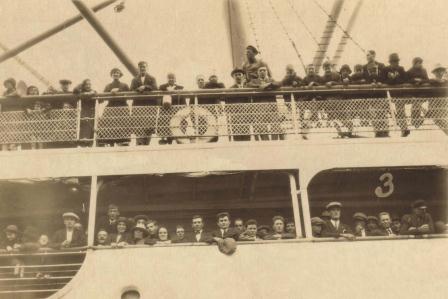 If you have reached a brick wall where you can not find your relatives on a census, it is possible that before they appeared on a census they emigrated from another country.

Many census' and possibly their marriage or death certificate will list the birthplace of your ancestor. So to continue your genealogical search you will need to search the immigration records for their names and how they were transported to their new life.

Although there were a couple of small settlements established in the Southern parts of North America, it is Jamestown, Virginia that is believed to be the first permanent European settlement in North America. The first settlers arrived on the shores of a river (now called the James River) in 1607.

From this time on, many English kept travelling to this new land to continue to inhabit Jamestown and its surrounding areas despite adverse conditions.

In 1620 the ship Mayflower set sail for North America and landed in the area now known as Plymouth (Massachusetts) and established a settlement. The passengers on the Mayflower were fleeing religious persecutionin England and The Netherlands and wanted to be able to worship as they saw fit. These people were known as the Pilgrims.

Between 1629 and 1641, thousands of immigrants from England came and settled in the North Eastern coast of North America.

The Dutch started colonising the Hudson River area from 1626 onwards and established the settlement of New Amsterdam (named New York after the English took it over).

The areas now known as Pennsylvania, New York and New Jersey were settled by English Quakers, Irish and Germans.

Learn How to Scrapbook